It has been a long time since we posted an update. It is turning out to be an amazing year. First off, let me back up to last winter. We spent a lot of time learning new agronomy practices. We are one of the few in the U.S. to be using 20 inch twin row planting configuration. As with anything new there is a lot of time spent working on the system to make it all work. First, we traded all the planters off and replaced with two 36 row-20 inch planters and one 20 inch twin row planter. That also required trading corn heads and selling some of the other 30 inch row equipment. With the new planters we spent a significant amount of time right before spring getting them ready for the field. We installed row cleaners with Precision Planting Clean Sweep, in furrow fertilizer tubes, fertilizer tubes for placing nitrogen and sulfur next to the row, tanks, tracks, and custom made brackets to modify row width to make spraying and fertilizer applications easier once the crop is growing.

We started planting April 17th. There were a few new equipment issues but overall planting went very well with about 95% completed by May 3rd. This spring we purchased a Unmanned Aerial Vehicle (UAV) to be able to take pictures and video of the new equipment in action. It is valuable to see how row units are performing in the field and other items to know how to tweak the system for next year. We received a heavy rain May 3rd in a localized area that caused ponding and erosion issues, but minutes later we were flying over the fields to diagnose water flow issues. It's amazing to see what a 3 inch rain flowing across a field teaches you. The conservation practices in place were literally overflowing because the water came so fast. So we are planning on some minor tweaks to the practices to make them better now.

Also new this year to us for managing nitrogen was the use of 360 Yield Center Y-Drops, a tool to mount on sprayers to apply nitrogen at the base of the plant, later in the season when plants are up taking the nutrients. We had our work cut out for us on trying to get across all the acres. We are thankful to have a dedicated team of employees that worked many long hours doing a job that was not very fun to accomplish. The weather was making the corn grow fast along with a few rain days to take away time that could have been spent in the field. Check our YouTube video of the application in the twin row corn.

As always, we are dedicated to learning and continuing our education. Cole completed The Executive Program for Agricultural Producers (TEPAP) in January at Austin, Texas. He also attended Top Producer Executive Network signature event in California, and our group meeting in Kansas and the Top Producer Seminar in Chicago. We also had another peer group meeting in Kentucky where we toured the Maker's Mark distillery. This summer Cole and Katie attended the World Expo in Milano, Italy, since the theme was "Feeding The Planet, Energy For Life". EXPO 2015 It was very thought provoking to see how consumer buying habits and new technology in food production will shape our industry. There were 140 countries showcasing how they are meeting the challenge of raising food sustainably for the growing world population. There are also two more peer group meetings, attending the InfoAg conference and other trainings scheduled this summer.

Cole, Katie and Family were chosen as Freeborn County Farm Family of the Year and will be attending FarmFest with the other Farm Families from throughout Minnesota on August 6th. Farm Family

The weather has been very cooperative lately and we are very optimistic of the potential we have this year!

We started combining beans on September 14th and were able to complete them yesterday, October 4th. We started picking corn on September 20th as of October 2nd were 20% done. Harvest is going wonderful this year (knock on wood) and we couldn't have asked for better weather. The forecast looks to be in our favor, so we are feeling good about the next couple of weeks. At the rate we are going, we hope to have harvest completed at the end of October.

We started planting today. We added some new fertilizer attachments on the corn planters, and today 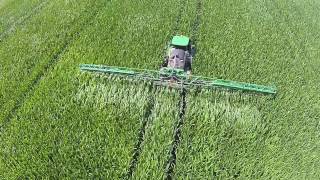